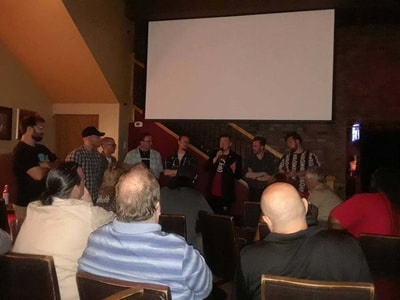 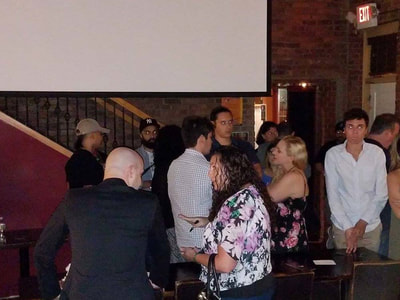 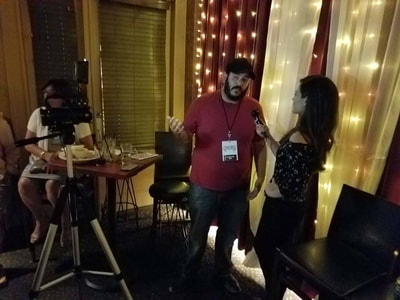 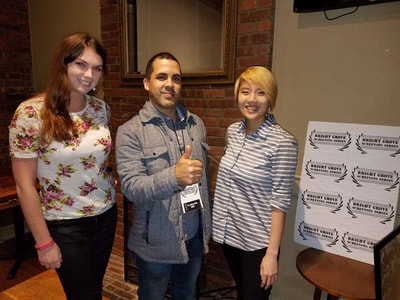 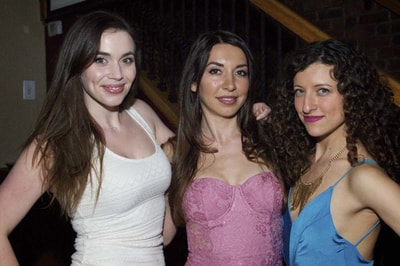 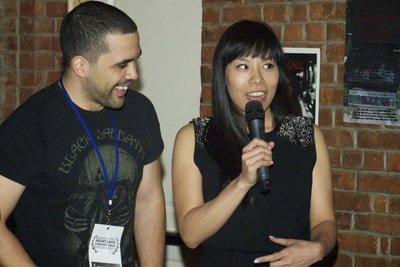 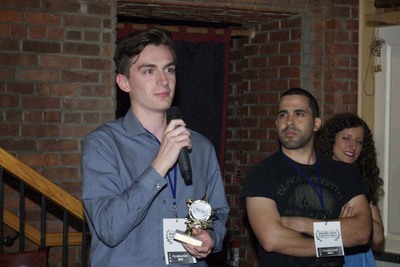 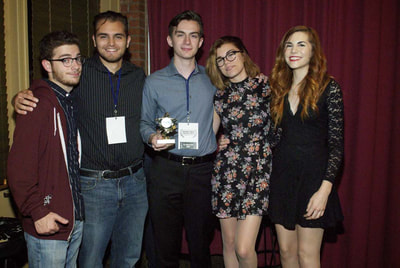 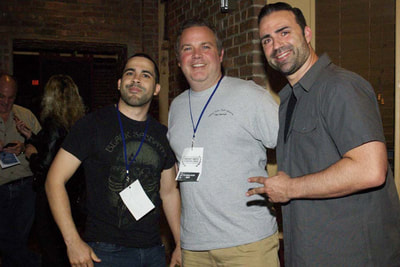 INTO THE OUTBREAK (FEATURE FILM)
Macy and John are nearing the end of their relationship. Mandy and Steve just had a one night stand. Then an infectious outbreak starts turning people into cannibals. Now each of these survivors must deal with their issues as they attempt to survive the outbreak. Low on food, no law enforcement, infected cannibals eating people in the streets, fear grows of what is outside and what might come through the door next.
directed by Larry Rosen

NIGHTGUARD
It's about Disconnect, or more specifically, a kind of potential cyclical disconnect of work-life and home-life and how that can shut a person in.
directed by Christian Lagalante

UNTIL THE END
After the apocalypse, survivors must hide, not only from the elements, but from each other. A trio must decide whether to allow one of their injured group members to put them all at risk, or be the monsters they are hiding from.

SANDBOX
A woman copes with grief through the use of a state-of-the-art virtual reality headset.
directed by Eddie Lebron

RIDING WITH SUNSHINE
This short is about two friend's Vikki and Mario and how a normal day goes from great to horrible in a blink of an eye. (It's based on a true story)It deals with racial profiling. 11min
directed by Kristian Comer

LIKE ME
The story of how Alexa Davis fights the daily battle of high school. In an effort to fit in and impress her friends, she makes some regrettable decisions and is ultimately faced with the same harassment and cyberbullying that she may have once promoted. 18min
directed by LJ Strong

DEATH-ISH
When Wes is killed in the line of duty, his grieving wife, Jamie uses the supernatural to bring him back with more than just love as her motive. 12min
directed by Jim Harkins

REALITY DISORDER
Nikki and Gerard, two struggling independent producers in New York City, are desperate for a hit series. After a promising meeting with a television network, they set off to make a reality show with Gerard's rich playboy cousin. 32min
directed by Gerard Bianco Jr.

SOUNDS OF FREEDOM
Julia, a service woman who returns from the Iraq war, and Vietnam Veteran Charlie. Both suffer from post traumatic stress disorder. These two veterans are challenged to the max when a serial killer strikes at home. web series. 5min
directed by Holly Chadwick

FAMOUS LAND
The life and relationships of three grown man that are best friends and how a single accident alters there lives forever. 25min
directed by Kaye Tuckermann

HEALING HEROES
A Drama/Comedy based on a Therapist who specializes in treating Superheroes and Villains. 10min
directed by Christopher Orangeo

TAKE A STAND, MAN
Alan is on a date with Melissa. Everything is going well. Looking to impress her, he is forced to intervene in a situation that he soon discovers he wants no part of. 10min
directed by John Wu

GARBAGGIO
In a bourgeois art department with a money-hungry department chair and a narcissistic professor, two janitors, Anna and Monty, have their day turned upside down when the impending arrival of a wealthy donor presents them with the opportunity to win employee of the month. 18min
directed by Michael Irgang

HALFWAY TO THE SUBURBS
In an attempt to prove his responsibility to his long-time crush, an egotistical, soon to be college student brings his eccentric younger cousin to a party. 20min.
directed by Avery Cohen

SPIT
A story of friendship renewed by an unusual childhood game. 17min.
directed by R.G. Rader

DESCENT AMONG THE TREES
A grizzled hunter, Travis, who has forgotten about the world around him, goes out into the woods for a hunting trip only to discover a maniac is after him. 7min.
directed by Marc Mifsud

LAST CALL
Jordan is trying to get through her day to party with her roommate. But her plans are derailed when she finds out some life altering news. 9min.
produced by Kim Paris

WIDE OPEN
A millennial couple struggling to define who they are to each other, decide to document their journey through a series of video blogs. 4min.
directed by Eddie Lebron

MOMTRESS
A short film/pilot about a busy Mom and actress who is trying to keep her life together for her kids while she struggles with aging and loss. 12min.
directed by Jeremiah Kipp

DEATH AT A BARBECUE
A group of friends get together for a barbecue. They decide to start telling horror stories around the fire. Although not everyone at the barbecue will make it home alive. As they tell stories, a killer begins to kill them off, one at a time. 90min.
directed by Larry Rosen

THE MEDIUM TOUCH
A paranormal reality show parody, follows Ophelia (O) as she investigates a haunting that may have been conjured by a classic family recipe. 11min.
directed by Louis Crisitello

AWKWARD FAVORS
A comedy in which each sketch has exactly one thing in common: a really HUGE favor. 22min.
directed by Sarah Teed

SOMETHING LIKE LOVE
A couple are being interviewed about their relationship. They both claim how perfect of a fairy tale their relationship is, but they are ignoring the real underlying issues the have. 5min.
directed by Larry Rosen

IF ONLY FOR A MOMENT
Sometimes love is brief and only a moment in time but forever lasting. 19min.
produced by Janel Tanna

LEKE
A young woman tries to fill the void in her married life by cleaning, but her newly developed obsession leads the relationship to an even messier level. 14min.
directed by Nafi Ayvaci

CONSENSUAL
College student Mateo attends a party where he unexpectedly finds himself navigating through the pressure of drugs, temptation and self-worth. 11min.
directed by Elisa-Sofia Fioretti

EVIL IS HERE
Two roommates awaken to find an intruder in their house. They must hide as he begins to stalk them down. It becomes more clear that he might be someone they know.
directed by Jennifer Marie

33 YEARS
A young woman is sent back in time to take down an extra-terrestrial who will one day mutate into the world's most destructive creature. 15min.
directed by Ryan Reid

GWENDOLYN
Gwendolyn has been waiting 20 years for revenge against the man who killed her parents. Now she may finally get it. 5min.
directed by Larry Rosen

HELPING HANDS
An aspiring filmmaker learns the value of being a production assistant on a professional movie set. 16min.
directed by Mike Jacobson

WHERE'S THE HELP
In urban America, trauma surgeons race to heal gunshot wounds and acts of violence...even though they were preventable. 4min.
directed by Jeffrey Teitler

EXIT STAGE LEFT
A college dropout with dreams of becoming an actress faces an old rival bent on taking her down. 8min.
directed by Raul Andres Hernandez

IT GETS BETTER?
An older gay man is inspired to record a testimonial after watching a bisexual teenager's video, assuring him that 'It Gets Better.' 11min.
directed by Stephen Riscica

CHASING THE DOLLAR
The fate of Leo and Roy falls to the hands of a homeless man, as they search for their single dollar bill worth one million. 18min.
directed by Ryan Altman

THE HOLY CLEANSE
Selena must pray to god asking for forgiveness for a terrible crime she about to commit.. to cleanse the soul of a sinner. 3min.

THE OTHER SIDE OF LOVE
When Winnie's boyfriend cancels on their anniversary to visit his friends, she decides to go out alone. She ends up finding reasons to question her relationship all together. 16min.
directed by Tyrell Jason

A REAL DATE
With no time to date yet tired of attending events alone, Elizabeth decides to take steps to at least have a male companion for the evening. 5min.
directed by Eric Carlson

THE LAST ANNIVERSARY
Victoria has asked her husband, Jordan, to meet her at a coffee shop. She is about to finally tell him how she really feels. 5min.
directed by Larry Rosen

IN THE NAME OF COMEDY
A frustrated comedian makes a viral video, but it winds up being his worst nightmare. 22min
directed by Jon Hart
trailer: https://www.youtube.com/watch?v=HpAYf8wpN2k

LISTEN
In a world were the only sound you can hear is your soul mate; Elliot embarks on the hunt for his own. 4min.
directed by Sean Boyle

RED FRIDAY
On the night of Thanksgiving, Jess realizes they forget to get the toy elf to come the next day for their daughter Nikki. So she sends her husband in the attic to find an old toy elf her grandmother had, who's been locked away for years. Then strange things start happening. 9min.
directed by Mark Allison
trailer: https://vimeo.com/178411411

EVIL RISING
A young woman with disturbing dreams suddenly finds herself thrust into her nightmares. Struggling for her sanity and her life, she must overcome the demons inside her to break free and save the souls of those who remain to be alive.....but can she also manage to save herself?  9min.
directed by Savion Smith
trailer: https://www.youtube.com/watch?v=nvnp1dez8Fk

SURVIVING THE OUTBREAK
After an infectious outbreak causes people to become rage filled and cannibals, a group of survivors must figure out how to get by. The infected aren't the only threat though. After the fall of society, people begin to lose their humanity, as these three struggle to hold on to theirs. 85min.
directed by Larry Rosen
trailer: https://www.youtube.com/watch?v=qFyTxHoHCn0
​